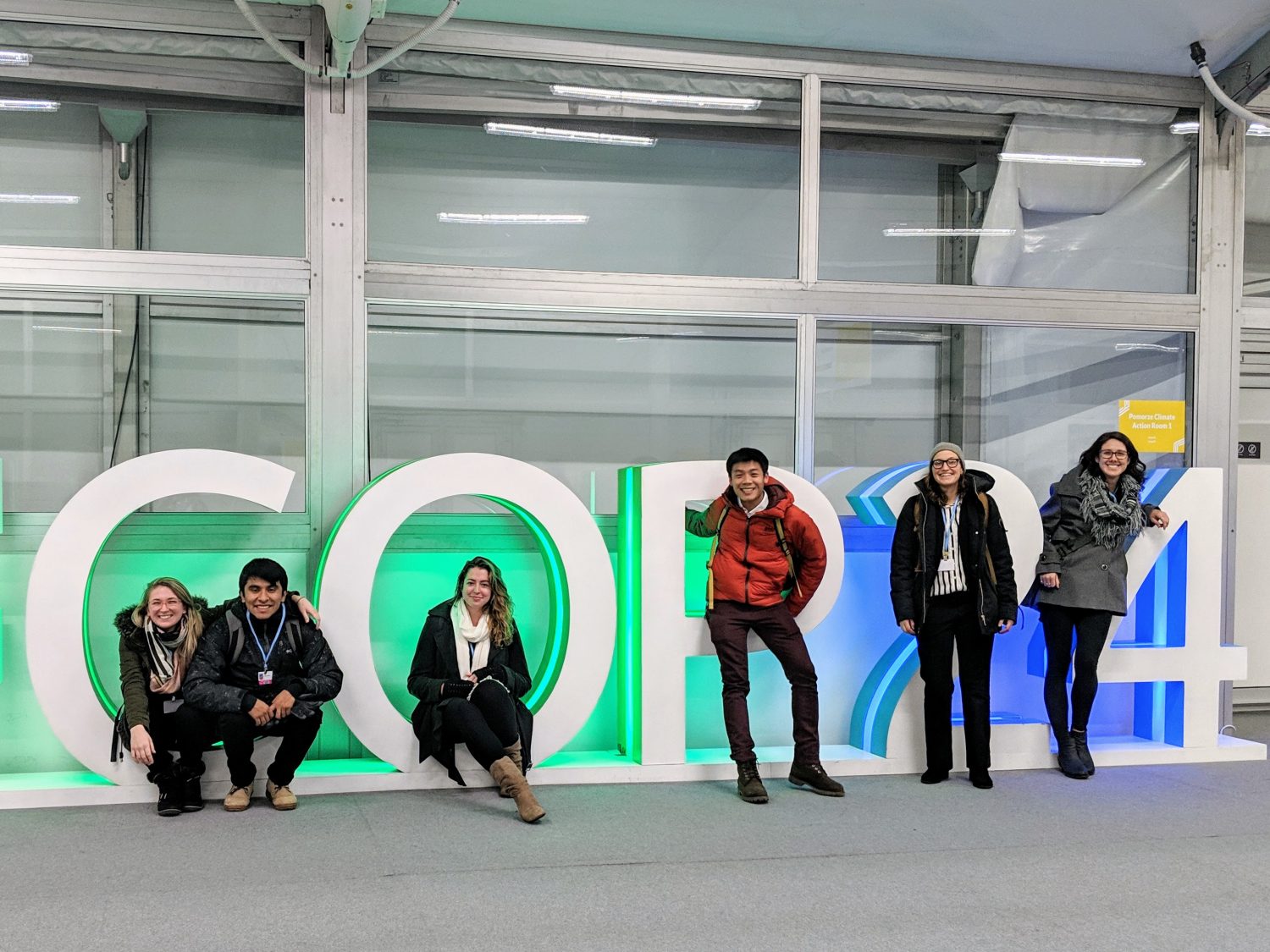 I’m an eternal optimist when it come to environmental issues. I think it comes from my experience in outdoor education – I have spent years connecting people of all ages to nature through science and exploration and have met so many amazing people who are working hard to care for our planet. I know it won’t be easy. I know that not everyone cares about sustainability and conservation like I do. But I tend to believe that there are enough of us who really care and are willing to do the research, outreach, advocacy, and hard work required to solve a problem like, for example, climate change.

This is the attitude I took with me to Katowice, Poland in December when I was given the fantastic opportunity to attend COP24 as the representative from this year’s MAS MBC cohort.

(Bear with me for a moment here. In this next paragraph, I am going to give you an information-heavy overview of COP24 for some context.)

COP24 is shorthand for the 24th Conference of the Parties to the United Nations Framework Convention on Climate Change (UNFCC). (Now you see why we say COP24.) The UNFCC is a 1992 international treaty with the objective to “stabilize greenhouse gas concentrations in the atmosphere at a level that would prevent dangerous anthropogenic interference with the climate systemâ€ and parties to the treaty (i.e. countries that have signed and ratified it) meet each year to check their progress, set new goals, etc. The big item on the COP24 agenda was to create a rulebook detailing how parties will carry out the Paris Agreement, an international agreement made at COP21 in which the countries of the world agreed to work towards limiting the global increase in temperature to 1.5 Â°C.

The full COP24 spanned two weeks. I arrived in Poland at the start of the second week and stayed in an Airbnb with a handful of Scripps PhD students and postdoctoral scholars that was just a short shuttle ride from the conference. Each day we would grab breakfast from one of the cafes on our street, spend the full day at the conference, and leave in the late evening to find dinner and peruse Katowice’s Christmas markets. The days were completely packed with different events: negotiations (some Scripps people had badges that allowed them to attend these), side events (talks and panel discussions put on by countries and NGOs), press conferences (Scripps held several of these!), protests (common at COPs, I learned), information booths to visit (Scripps had one of these that we staffed in shifts) and more. At any given time, there were at least 10 different things going on. It was definitely a bit overwhelming at first. Going into COP24, I wanted to gain a better understanding of how global policy is created. I was particularly interested in how other delegations would handle disagreements with the current US administration and other countries with large fossil fuel industries that have recently been impeding negotiations. I also wanted to better understand the role of NGOs and research institutions, like Scripps, in the UNFCCC process. With those goals in mind, I spent most of my time attending negotiation updates (which often started late or were postponed by several hours as countries tried to agree on specific language) and briefings by NGO groups such as RINGO, the Research and Independent NGOs group. I also stood in line for like an hour to see Al Gore present – because how could I not take advantage of that opportunity? (His talk was fantastic, by the way.)

I learned a lot. It turns out that multilateral negotiations are really tough and when powerful countries like the United States, Saudi Arabia, and Russia decide that they are not on board, it can seriously stall progress. I learned that while scientists and NGOs can advise the negotiations, in the end it is up to the parties to agree on a path forward. It can be frustrating to be on the outside looking in, especially when the stakes are so high. But I also understand that if we want countries to implement a plan to combat climate change, they need to be the ones to hash out and agree to the details of that plan. My favorite moment at COP24 was when I listened to AntÃ³nio Guterres, the UN Secretary General, address observer organizations (NGO groups). I almost didn’t make it into the room. Security had already closed the doors and weren’t letting anyone else in, then decided to let in three more people. I was fourth in line but the guy in front of me had the wrong badge – he was there with a certain country’s delegation instead of an observer group – and wasn’t let in, so I took his spot. I stood in the back of the room and listened as Guterres answered questions from the various NGO constituencies. He was direct, kind, and candid. At the time he was speaking, negotiations on the Paris Agreement rulebook had hit a wall and things were not looking great. The general expectation was that if the countries were able to agree at all, whatever they agreed upon would be a weaker document than many had hoped. Â Guterres ended that meeting with this quote: “I have no doubt that at the end of this, many of you may be disappointed. I may be too. But what matters most is to never give up.”

I love that quote. It speaks to the optimist in me. In the end, COP24 did produce the Katowice Rulebook, which was indeed a weaker document than it could have been. Some powerful countries dragged their feet and watered it down and that was, for many, a tough pill to swallow. But you know what? I heard some powerful calls to action from countries that only a few years ago were largely silent on climate change. Scripps sent more representatives than ever before, joining other research institutions in bringing some of the best available science directly to global policymakers. While parties negotiated behind closed doors, non-state actors (local/state governments, NGOs, etc.) gave big presentations about how they are moving forward with their own plans to combat climate change. Roughly 30,000 people attended COP24. Next year, they will meet again to again work towards progress. I will have graduated by then and with any luck, I’ll be helping to shape environmental policy either in Washington, D.C. or here in California. Those of us who care will be working hard – and definitely never giving up.